While Marmaris provides you all the fun, comfort and excitement, Ephesus has something very interesting to offer. Marmaris Ephesus Tour is a real treat and you will be amazed to know the history of the biggest ancient city in Turkey.

Ephesus is also known as one of the best preserved ancient city site in Anatolia. Situated at about 190 km from Marmaris, this ancient city site is a must to visit. Ephesus has many ancient monuments and their remnants in open; it appears as if this open air museum breathes, and lives with as many as 2 million people visiting this place annually. You will cover 190 km journey from Marmaris to Ephesus at about 3 hours with comfortable buses. Our Professional guides will tell you more about the place as you walk through Ephesus.

The ancient city site of Ephesus has many interesting and valuable archeological treasures like the Temple of Artemis, which is regarded as one of the Seven Wonders of the Ancient World. Other monuments of interest include the Hadrian Temple, the Library of Celsus, and an impressively large ancient amphitheater. The grand theather of Ephesus has a capacity to accommodate 24,000 people at a time. The recent excavations have revealed that the present site has two more ancient cities buried beneath it. Thus Ephesus is the third city on the same platform and has a history that dates back to 245 BC. The Legend says that the first city was founded by female warriors known as Amazons. Carians and Lelegians are suggested to be the city’s first inhabitants.

The city has seen Ionians, Lydians, and Persians through the ages and when Romans took over the city in 129 BC, the city was teeming with 200,000 citizens inhabiting in it. Soon, Ephesus became an important center of trade and commerce in the ancient world. From the first century AD, Ephesus also saw Christian disciples visiting the place to spread the faith of one God. History says, St Paul remained here for three years and that St John and Virgin Mary had visited this place during their last days.

Ephesus is one of the most notable archaeological sites in the country. Choosing to visit this site is definitely an experience not to be missed. The site has many points of interest such as the ancient city of Ephesus, as well as some very important religious monuments. The ancient city of Ephesus used to be the second largest and most important city after Rome, during the period of the Roman Empire. Thus, visiting Ephesus enables you to observe several impressive structures and get an in-depth understanding of history.

This particular tour takes place every Thursday and Sunday. For your own comfort, a vehicle will pick you up from your hotel in Marmaris and drive you to Ephesus. A professional tour guide will accompany you to visit all historical sites. The excursion continues to the ancient city of Ephesus where you can observe and admire the stunning structures. Among others, you will get the chance to observe the marble streets, houses with mosaics, temples, statues, the ancient theatre and the library of Celsus. The tour includes also some free time at Selcuk town. During this time you may visit the House of Virgin Mary. According to historical findings, Virgin Mary spent her last days there with Saint John. The house is standing in a tranquil and picturesque landscape and you will have some free time there to admire the beauty of nature. This full day excursion to Ephesus includes also a lunch that will have at a local restaurant. During the afternoon, by the end of the excursion, a fully air conditioned vehicle will drive you back to Marmaris. 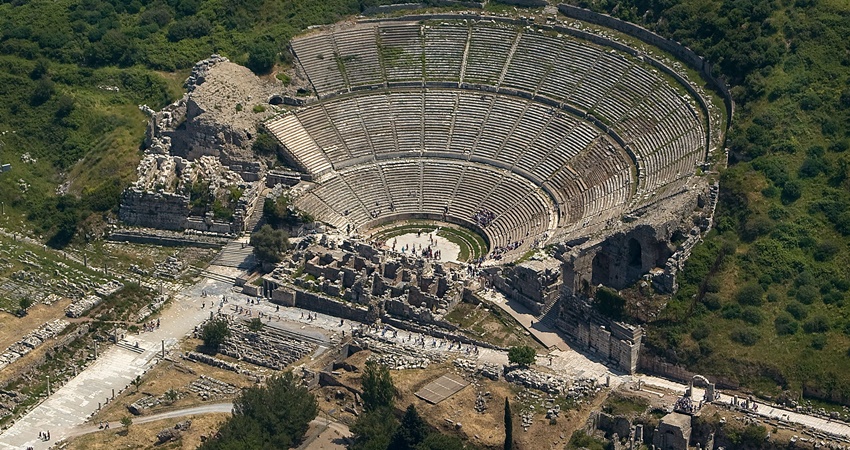 For the purposes of this exciting tour, our guests will have a comfortable drive between Marmaris to Ephesus. This road trip is approximately two and a half hours, during which you will have few short stops in order to relax, snap some photos and enjoy spectacular landscapes. Members of our team will pick you up from your hotel in Marmaris with a comfortable, modern and fully air conditioned bus so you can enjoy this road trip at its maximum.

This full day excursion from Marmaris to Ephesus is ideal for all as it combines sightseeing, exploration and adventure. Thus, it is also a good tour for solo travellers, families with small children and groups of friends. Please note that, based on the points of interest that are included in the schedule, this tour is not suitable for people with walking difficulties. Due to the high temperatures that the area has during the summer time, please do not forget to bring a hat, sun cream and sun glasses. In addition, for your own comfort, please wear comfortable shoes and clothes.

According to the itinerary, you will have some free time to spend in the charming town of Selcuk. The town has some very interesting sites, such as the House of Virgin Mary, the Isabey Mosque and the Saint John’s Basilica. In case you wish to enjoy a break between sightseeing, Selcuk has its own unique charm. The narrow streets of the town are the perfect spot to receive the real vibes of the town, understand the local culture and the lifestyle of the people. During this time, you may also purchase some really interesting souvenirs in order to take back home. There are many small shops at Selcuk selling all kind of handcrafts, clothes and local delicacies. 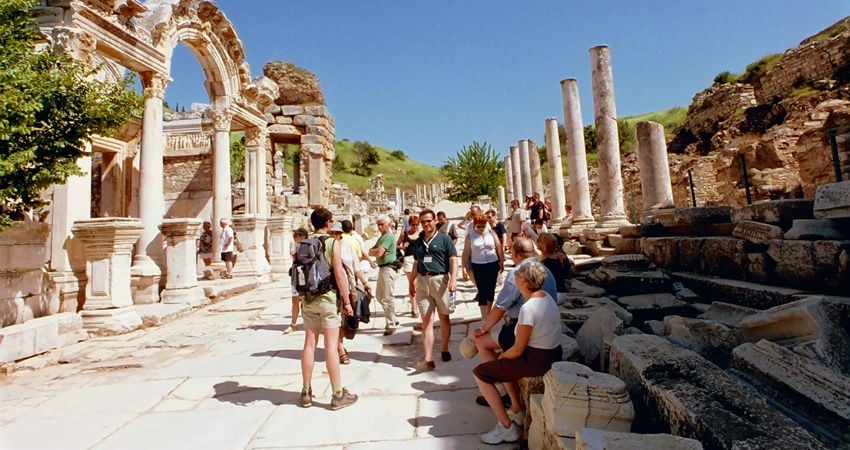 Ephesus is able to offer you a truly exceptional sightseeing experience. During your time there, get ready to visit the ruins of the Artemis’ Temple. This magnificent site is one of the 7 wonders of the ancient world due to the impressive size and design that used to have. In addition, you should also expect to admire the upgraded aesthetics that the site has. Ephesus was entirely constructed with marble and has impressive marbles streets with statues. Ephesus has also some stunning structures worth visiting, such as the ancient theatre and the Library of Celsus.

Marmaris Ephesus Tour is as a full day excursion, with an approximate duration of 12 hours. According to the tour itinerary, the excursion includes a transfer service from your hotel in Marmaris and back. In addition, you will have a professional tour guide all day long with you. The experienced guide is the person in charge to assist you in case you need and provide interesting descriptions about the places of interest. The tour includes also a breakfast and a lunch served in local and cosy settings. The lunch includes some typical local recipes. Full travel insurance is also included in the price. Please note that, drinks, extra activities during the free time, other extra entrance fees and personal expenses are not included in the price of this tour.

Departure : Pick up from your Hotel